Edition 2017-11-07:   Strategic Vision for a Viable American Future — Open letter with a moral story of truth for our time

This is the fourth edition of The Unheard Herald, an eNewspaper in pdf format with associated webpage material, first launched on April 7, 2012. This edition is created, written and published by Root Routledge, who was a Colorado Democratic National Delegate for Bernie Sanders in 2016. This edition is an online downloadable pdf book, designed to be printed double-sided. This edition's publication date is set as November 7, 2017, even though the book itself and website were updated with additional content into February, 2018.

Click on the eNewspaper pdf image to the right for the most current update. It fleshes out the full details, with the facts, analysis and story behind the argument for a new Strategic Vision and how it relates to ordinary American families of all political persuasions, economic status and background.

The poster below lists the key elements of this Strategic Vision. 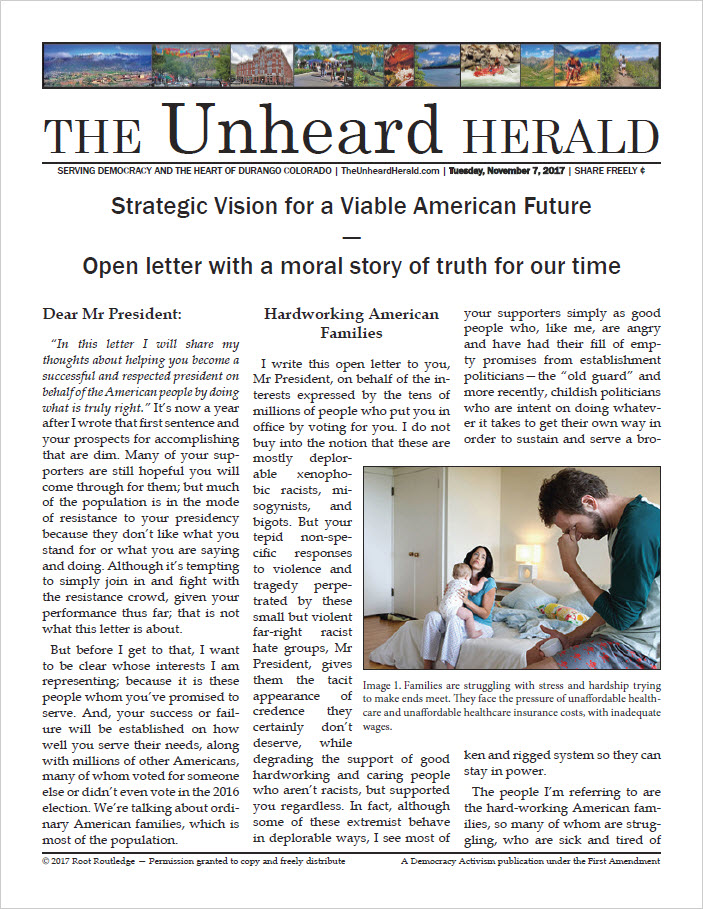 Root is running for Congress! UPDATE 2020

Root Routledge made a brief run for Congress in 2018. Finishing this book delayed his announcement until February 22nd for Colorado's 3rd Congressional District in the 2018 election. The third district includes the entire West Slope of the Colorado Rocky Mountains, from Steamboat Springs in the north by the Wyoming boarder, down to Cortez and Durango in Southwest Colorado, on over to Pueblo. It includes Grand Junction, Telluride, Aspen, Montrose, Durango, Alamosa and many other towns between. This rural Congressional District is one of the largest Districts in the nation; in fact, it is the largest congressional district in the country that is not an entire state.

Check out Root's new website to find out all about it: www.RootForCitizenCongressman.org. This page of The Unheard Herald is all about the vision and platform Root is running on, which includes the link to his new book shown above. His campaign website has many photos, a summary of his positions, and a brief biography describing his western working family roots, with links to more photos.

Root is a Vietnam Veteran, an industrial consultant, and a Westerner. He was born in British Columbia, Canada, and has lived in Washington, Colorado, Montana, and Oregon. You can keep up with his campaign on Facebook: https://www.facebook.com/RootForCitizenCongressman.org/

Captain Root Routledge (Vietnam War Veteran) and his friend Captain Allison Scobie, RN (Afghanistan War Veteran), walked in the July 4th parade with the La Plata County Democrats. We both carried the poster posted on this page, titled: "Strategic Vision for a Viable American Future" developed by Root for this edition of The Unheard Herald, with the top line reading "Progressive Veteran Warriors" (see poster and detailed description below). Don Triola (Vietnam War Veteran, U.S. Navy SP 1968-70, Da Nang and China Beach) drove his classic 1936 International Harvester truck in the parade and had a 4' x 3' version of the poster on each side.

Allison is a U.S. Army combat field surgical nurse who was based at Bagram Air Base, Afghanistan. She is now in the Army Reserves (and was just promoted to Major in November, 2017), after earning a masters degree in Public Health. Allison went into Afghanistan battlefields from Bagram as part of a Forward Surgical Team (FST) on Chinook helicopters to set up and operate a Forward Surgical Unit (FSU) in order to save the lives of severely wounded soldiers near the active battle field. The team could rapidly set up an FSU, a temporary field hospital with 1 operating room, 1 emergency room with 4 beds, and 1 Intensive Care Unit (ICU) with 2 beds, in only 1½ hours. The deployed FSU helped save numerous lives in the field by being able to operate on wounded soldiers quickly under battlefield conditions, treating life-threatening injuries, before the wounded soldiers were medevaced via Black Hawk "Dust Off" helicopters to the Bagram Air Base hospital, then onto a hospital in Germany on C-17 medevac flights.

Watch the short (1:17) parade video, with Pete Seeger's "This Land is Your Land". Photo and video attributions for the parade are all credited to my friend Tom Morrissey of Durango. The composited video has been uploaded to my "Root For Bernie" YouTube page.

This 30"x34" poster is not for sale; better yet, the poster pdf is available for free download here. It comes with multiple top title alternatives shown below.

Poster © 2017 Root Routledge. Permission granted to freely download, copy, print, use and distribute as unaltered poster. Designed for 30x24 poster board or weather proof Coroplast® board; but also looks great at 150% (48"x36" including 1½" boarders) for parade floats or pickup trucks, which I used in both our Bayfield and our Durango, Colorado, July 4th Parades.

The above poster version is the one I've been using, including the 150% (48"x36" with 1½" white border) version printed on Coroplast® board, of which I had one on each side of the truck in the back of my Vietnam Veteran friend Don Triola's classic 1936 cherry red International Harvester truck.

I've had several questions and comments about the top line of the poster and its meaning, so let me explain that a bit. Also, I've updated the link directions on the poster to include this eNewspaper site directly, as well as my "Root For Bernie" Facebook page, which links to this site. Due to the comments about making its use available to wider groups of people, I've created several versions with different "top line identity" phrases, which I'll describe below with links to downloadable pdfs for each version. If you don't identify with the top identifying title, noted above for example, but like what the rest of the poster says, I hope you'll be able to find one below that fits for you.

Stance — "Progressive Veteran Warriors": Regarding approach, I gave a lot of thought about how to position the poster at the top, trying different wording for the top identifying title line, and there was some concern expressed about my use of the word "warrior" and if this meant a "pro-war" stance. Webster defines the term "warrior" beyond the presumed meaning of "engaged in or experienced in warfare," which most combat veterans are or were, thus earning that title. The broader meaning, however, is "a person engaged in some struggle or conflict", connoting actively "fighting" with a purpose for a cause, such as "poverty warriors," "climate warriors," and so forth. Many "Green Peace Warriors," for example, are long term veterans for their cause. Thus, both the terms "veteran" and "warriors" have non-military identity connotations as well. "Warrior" is also commonly used with honor by Native Americans to refer to those who are willing to and do stand on the frontlines for their rights and causes. Democracy is fragile; it requires all of us to protect it—In that regard, anyone fighting to keep our democracy alive is a "warrior" for the cause.

For me personally, I settled on the Standing Rock Native American model with a long history of “veteran warriors” fighting for water, mother earth and life against DAPL and decades of state-sponsored assault on their rights and sacred lands. At a recent multi-tribe Hozhoni powwow ceremony to honor veterans at Fort Lewis College the Spring of 2017 in Durango, to which all military veterans were invited to attend to be so honored, the Indian speakers consistently referred to honoring us as “warriors” who fought for our country—it’s an honorable title we military veterans damn well earned; again inclusively, but especially Native American warriors. At Standing Rock thousands of military veterans also showed up as “veteran warriors” to protect the native “water protector warriors,” as they called themselves; including my friend Tom Morrissey's son, Luke, an Iraq War veteran and Army Seargent, who incurred a TBI from an IED in Iraq. At Standing Rock Luke took a direct hit in the chest right on his "Red Cross" medic patch from a rubber bullet projectile out of the police lines at Standing Rock. The word also implies the continued patriotism I and many feel as veterans due to the circumstances we find our country in at this point in history—defending our Constitution and America against all enemies, foreign and domestic. Thus it does not refer to hostile military conflict per se, but to those who are fighting so save our county and its future.

The content of the poster makes clear the term “warrior” in this context has nothing to do with promoting foreign “wars/bombing” etc, which I know you, me and so many others are against unless our national defense is truly at stake; but I will not cede the term "patriot" nor the flag nor the American Anthem nor the "USA" chant to others, especially right-wing Republicans who seem to think that "patriotism" and the American flag and our National Anthem represent turf that belongs exclusively to them. That's merely cheap and shallow "flag waving" patriotism if that's all you've got. What we're talking about here is deep patriotism—fighting for our country's democracy. "Progressive Veteran Warriors" is an intentionally assertive phrase with the connotation of fighting for what’s right and the very future of our country. Our country is in fact under attack by right-wing zealots and currently in the control of right-wing extremists; and I for one am doing my best to fight against that, which is what this edition of The Unheard Herald is about. We are indeed in a “war for the future” of our country and planet; I am one of those warriors. So, no apologies for the top line “Progressive Veteran Warriors”, but I understand others might prefer different wording more in line with their own identity, yet like what the rest of the poster says. I wanted to indicate that the right does not own these patriotic memes and that we progressive veterans are anything but passive “lefties”; we are actually fighting for what’s right.

Not just being "for" something; but making a stand on something solid: Further, the top two titles together do refer to “Veterans for a Viable Future”, but that alone is a bit too “milk-toasty” for me, because the intent of the poster is not just standing on the sidelines waving a sign about what I’m "for"—I’m actually fighting for it—meaning genuine activism. It means standing present with a strategic vision for our future.

Regardless of the version below that might better match your identity; although the poster isn't simply about being "for" something, it is entirely appropriate to use it that way. But it says more. It says, in my chosen case, "Here I stand on solid American ground and fight for our future," as a Progressive Veteran Warrior, and hold the space of a "Strategic Vision for a Viable American Future". And the rest of the poster content states what that means. If you're in line with that, I encourage you to download whatever version fits for your own identity, get the poster printed and made (I did mine through Basin Printing in Durango, Colorado), and use it either walking in protests or simply standing on the side and cheering others on. I found people will take a picture of it in order to save and study the detail later, including being able to get the poster via the stated links on the poster itself.

Documents referenced and linked to in this edition:

Note: These are reference documents layed out here for easy referral and access; however, they are more understandable when read in the flow of the story told with the edition links as they tie in directly with related narrative about them. This is the recommended way of engaging all these documents; then come back to these document links, if you wish, to see any particular document again.

Documents—Links To Referenced Articles and other materials: